Get to know Darius Sanders 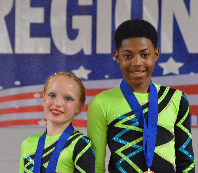 Alzein Pediatrics loves to share our patients’ stories. Darius Sanders has been our patient since he was a newborn and now he’s a world champion. While he’s always been a champion with us, we hope you enjoy his story.

– As the International Olympic Committee edges towards recognizing roller figure skating as a full-fledged Olympic sports, one Glenwood family is watching particularly closely. Darius Sanders laced up his first pair of roller skates when he was 4 years old, two years after the IOC first selected roller sports for consideration to be an official part of the Olympic Summer Games.

Today, 14-year-old Darius, along with his partner Samantha Krusza of Lynwood, is a United States Rolling Figure Skating Champion, winning the title in Albuquerque, New Mexico. He is hoping to compete in the 2020 Summer Olympic Games in Tokyo, Japan as a fully-recognized Olympic athlete.

Darius began skating free style with his family at an early age. Mom Cassandra was a competitive skater and Dad Philip and brother Philip Jr. love to skate as well.

“It’s a different type of physical activity than the more traditional sports,” says Philip Sanders. “Baseball and soccer are fine, but skating is just great overall exercise. Skating works out your whole body.” Sanders shows a great deal of concern about the childhood obesity crisis and strongly advocates skating as a factor in the solution.

“Not only do your leg muscles get exercise with the spinning and jumping – those skates are about 10 pounds apiece – and your arms get a workout with lifts, and your lungs and heart get a workout too,” says Sanders.

Darius has skated in competitions all over the country, including Nebraska and New Mexico. He is on track to compete in Poland in 2018. As a world-class skater himself, Darius is now competing at higher levels.

“Now he’s moving up a level and feeling a little frustrated,” smiles Sanders. “He is used to winning those first place medals and now, against older skaters, he’s placing down on the podium. I tell him, “Now is not your turn. Your turn is coming. You will get older and stronger, and you’ll be even better than that guy is now.” But he still wants those firsts.”

That work ethic is something coach Anita Roberts noticed a long time ago. “I’ve been working with Darius since he was a tiny tot, just 4 years old. He is a conscientious skater and a hard-working skater.”

Coach Julie Jessup agrees. “I’ve been working with Darius for three years now and he is just a joy to work with.”

As part of the Glenwood Skate Club and the Lynwood Skate Club, Darius has accumulated well over 100 medals over the course of his skating career. He is an expert at the fluid arabesques, majestic jumps, and stunning spins that make up a figure skating routine. He loves to spin; he is fast and he is smooth. The lifts he performs with Samantha are considered signature moves. Darius also loves to ice skate, but finds the difficulty of managing four wheels a more satisfying challenge.

Darius began high school this fall and discovered that all that skating has also made him an remarkably quick sprinter. So far, he remains focused on skating and getting to competitions in Paris, in Poland and to the 2020 Olympics.

Getting there does require considerable financial support. To raise funds for coaching costs, travel fees, uniforms and equipment, Sanders has set up a GoFundMe page, https://www.gofundme.com/darius-roller-skater-champion-2017. Contributions of any size are welcomed and deeply appreciated.

When the IOC recognizes roller figure skating as an Olympic Sports, Darius Sanders will be there, skates on and ready to spin.

Yes, it IS time for a check up!
New Covid-19 Complications In Children: What they are and what parents should watch for
Cereal, Bananas and Peas! Getting started with solid foods
Is this the perfect time to potty train your toddler?
Keeping all our patient families safe from coronavirus or covid-19 in our offices.

Yes, it IS time for a check up!

Your child’s health is one of your greatest concerns and making sure your child is developing well both physically and mentally is Alzein Pediatric’s mission. While we understand that the healthcare focus of our entire world has pivoted to Covid-19,…
read more

New Covid-19 Complications In Children: What they are and what parents should watch for

Just a few weeks ago, coronavirus or Covid-19 was thought to be a threat mostly to the elderly and those with chronic healthcare issues. We worried that children were unknowing carriers but unlikely to develop symptoms of Covid-19. Now, as…
read more

Is this the perfect time to potty train your toddler?

Just a generation or two ago, potty training was very nearly a competitive sport, with mothers - and grandmothers - taking pride in how soon a child could use the toilet. While most of this “get em outta diapers” attitude…
read more

Keeping all our patient families safe from coronavirus or covid-19 in our offices.

Coronavirus or covid-19 is becoming a more serious health issue everyday around the globe, across the country, in Illinois and especially Cook County. With new cases each day, Alzein Pediatrics is aware of our responsibility to keep our well patients…
read more
read more posts