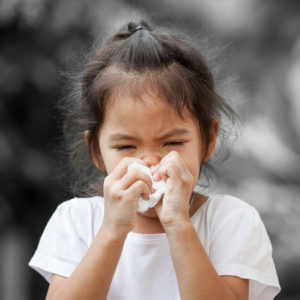 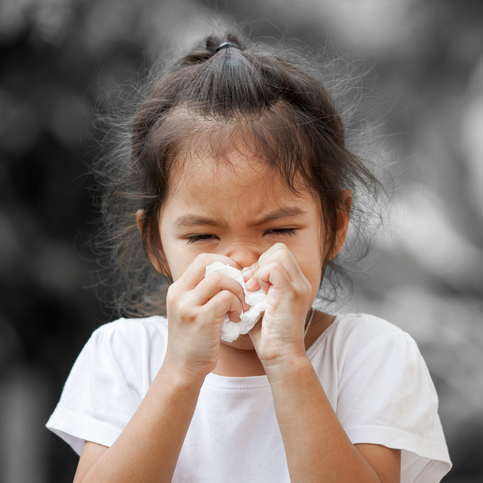 It was when her paramedic husband Adam (names have been changed to protect patient privacy) “freaked out” that Mary Coso really became terrified. Son Brian’s eyes were so inflamed from allergies that “they looked like they were going to pop right out of his sockets,” said Coso. “And when Adam flipped out, I knew something was really wrong.”

Brian was just 3 years old when he started experiencing severe allergic rhinoconjunctivitis, beginning in the spring when the trees bloomed. He would suffer from a stuffed nose and itchy, watering and swollen eyes until the first frost in late fall. Often, these reactions resulted in a trip to the emergency room for the Merrionette Park family.

The family’s pediatrician, Dr. Hassan Alzein of Alzein Pediatrics, began prescribing the therapies available for a toddler, including prescription medications, over-the-counter medications and nasal sprays. “For many children with allergies, avoidance is the first line of treatment and can often be good enough – not having a dog, keeping the air conditioning on, perhaps taking an antihistamine when warranted. However, in Brian’s situation, avoidance wasn’t enough or really even possible, so medication was necessary.” Unfortunately, Brian’s allergies were so intense, these treatments were of minimal help and Coso worried about how many drugs and medications she was putting into her pre-schooler.

Dr. Alzein referred Brian to a local allergist who performed blood tests and then recommended weekly injections, subcutaneous allergen-specific immunotherapy or SCIT, during the allergy season, but Coso just couldn’t bring herself to go through with that course of action.

“I couldn’t see myself taking a then 4-year-old for a weekly shot, and I wasn’t entirely convinced they would work, as the allergist mentioned that Brian was the youngest patient she’d ever seen,” said Coso. The family instead adhered to Dr. Alzein’s medication recommendations, even though the Brian protested that the frequent use of nasal spray was “shooting in his brain.”

Summer was a nightmare for the Cosos. “We went from having the heat on to putting on the air conditioner, never opening windows. There’s a big old tree in the neighbor’s yard that faced Brian’s window, so of course there was no way he could sleep with the window open. All that stuff would blow right in on him.” Both Mary and Adam were vigilant about protecting Brian as much as possible. “No matter how tired he was, he had to take a bath before going to bed. We washed his hands constantly, we nagged him about putting his fingers on his face and in his eyes. We told him constantly, ‘wash your face, wash your hands’. We were always on him.”

attended a World Allergy Organization continuing education symposium about an emerging treatment for allergic rhinoconjunctivitis and allergic rhinitis, he saw hope for Brian. Sublingual immunotherapy, or SLIT, was proving to be every bit as effective as the SCIT injections, but with a much lower risk of side effects and significantly easier treatment administration. SLIT, distributed under the name AllerVision, is taken orally, in drops placed under the tongue, at home.

“I realized that AllerVision could make an enormous difference in Brian’s life,” said Dr. Alzein. “Unfortunately, it is very underutilized in the United States, but it’s been used in the U.K. and around the world for decades.” He arranged for the developers of AllerVision to visit his offices in Oak Lawn and Evergreen Park. “The developers trained all our medical staff on the testing, on the serum administration and answered all of our questions about the safety and effectiveness of these treatments. All of us, myself, Dr. Riff and Dr. Sundermeier, and Physician Assistants Ms. Molloy, Ms. Cermak and Ms. Denny, wanted to be sure we had complete confidence in the therapy before our practice began recommending it.” He spoke with the Cosos, explained the treatment and, with Mary and Adam’s okay, began helping to change Brian’s life.

Blood test results showed that Brian was allergic to “nearly everything outdoors,” said Coso. He showed sensitivity to trees, grasses and weeds. Brian showed no reactions to animal dander, dust mites, molds or mildews and did not present with any notable food allergies. His reactions to these irritants were confined to a miserably congested nose and irritated eyes; he did not suffer from respiratory distress.

Dr. Alzein also performed a grid test, applying a variety of allergens through painless tines to Brian’s back and waiting for a “wheal”, an itchy, red and raised bump surrounded by a “flare”, which would indicate a sensitivity to a particular substance. The larger the wheal and flare, the greater Brian’s sensitivity to that allergen.

All test results were sent to AllerVision, who formulated serums specific to Brian’s needs. The medication shipped directly to the Cosos and Brian, then 5 years old, was given eight different drops under his tongue at bedtime for several weeks. After that initial therapy, his prescription changed to three drops, all from the same bottle, under his tongue at bedtime. This would be administered for the next four years.

The serum contains trace amounts of Brian’s main irritants, enabling him to build up a tolerance to those irritants through small, daily exposure.

The AllerVision serum is tasteless, says Coso, who says Brian is not resistant to the drops at all. “He’s like a little baby bird,” she laughs. “He opens up his mouth and I drop them in. He actually likes taking it because he’s not itchy and puffy anymore.”

Coso was extremely regimented about the AllerVision treatment. She kept a chart inside a cabinet to faithfully track each day’s dosage. She noted that the bottle of drops is small enough to travel easily.

Each year, Dr. Alzein has repeated the grid test with Brian. Dr. Alzein notes that the test results may not always reflect a declining resistant to an allergen; real life results are more indicative of the therapy’s efficacy. “We didn’t take pictures of the first test, but the difference between year two and year three was just amazing,” said Coso. “There is still some redness, but the wheals are not nearly as bad.”

The improving test results are borne out in real life for Brian, now 9. “It has made a huge difference,” said Coso. “Brian is able to be outside, to roll in the grass with the dog, to play baseball and football.”

“We used to go through multiple bottles of eye drops, using them two to three times a day, which Brian just hated, every summer,” said Coso. “Last summer, we used just one bottle all summer long. He used to take daily allergy pills, but the last two summers, he had just very minor flare ups and we rarely needed medication for them.”

Brian took his last drops on April 11 of this year.

Dr. Alzein notes Brian’s new immunity to those allergens is likely to last his entire life; he won’t need to repeat the therapy. “Most patients that use SLIT will see improvements within two months and will experience complete remission of their allergies throughout the course of their life. Because we can safely prescribe SLIT to very young patients, we can save them from a lifetime of suffering.” AllerVision and SLIT is only effective for environmental allergies such as dust mites, molds and mildews, animal dander and pollens; it is not prescribed for food allergies.

After the initial prescription, the serum ships directly to the patient’s home, eliminating frequent doctor office visits, saving hundreds of hours for parents each year. SLIT is an eligible expense for Health Savings Accounts and FlexSpending. AllerVision is formulated with FDA-approved antigens and is endorsed by the World Health Organization.

Alzein Pediatrics is the only pediatric practice in or near southwest Chicagoland prescribing SLIT at this time and Brian was the first Alzein Pediatrics patient to try the AllerVision treatment. The medical professionals at Alzein have now prescribed the treatment to dozens of other patients who are finding the same success that Brian has found. More information about SLIT can be found at here or by calling 708-424-7600.

Dr. Alzein was touched by Coso’s trust in his inaugural recommendation. “Telling a parent that you have a new therapy, one that you haven’t tried before, and having that parent agree to use that therapy, especially in such a severe case as Brian’s, that makes you believe you are doing the right things as a physician.”

Dr. Alzein, Coso says, is a unique pediatrician. Brian’s sisters Bridget, 19, and Rachel, 15, are also patients at Alzein Pediatrics. “Dr. Alzein actually listens to you. He believes that parents actually know their own children and he respects what you are telling him. He never dismisses you.”

For Brian and the Coso’s, Dr. Alzein and AllerVision’s SLIT has been life-changing. “I would recommend Dr. Alzein and this therapy to anyone,” says Coso. “It has definitely been worth it.”

Alzein COVID-19 Testing Centers and In-office Testing
Pyramids or Plates? Join us for Virtual Nutrition Basics on January 27th!
Making Halloween As Fun – and As Safe – As Possible This Year!
We’ve Added Another Drive Thru Flu Vaccine Event at Evergreen Park!
Alzein Pediatrics is pleased to welcome Anna Velazquez and introduce “Nutrition with Alzein Pediatrics”!

The coronavirus is, most unfortunately, continuing to surge throughout our globe and in Chicagoland itself. With an ever-increasing need for testing to ensure that infected adults and children begin quarantining immediately to protect those around them, Alzein Pediatrics offers Alzein…
read more

Pyramids or Plates? Join us for Virtual Nutrition Basics on January 27th!

Remember growing up with the Food Pyramid? This USDA guide to eating had a wide base of bread, rice and pasta, with a tiny tip of fats, oils and sweets. As researchers’ knowledge of nutrition grew, and as the obesity…
read more

Making Halloween As Fun – and As Safe – As Possible This Year!

COVID-19 is putting a real scare into our annual celebration of “ghosts and goblins”. How can we make sure our kids are enjoying a real Halloween without putting them - or our loved ones - at risk for this illness?…
read more