Fifth Disease sounds like a big deal. Is it? 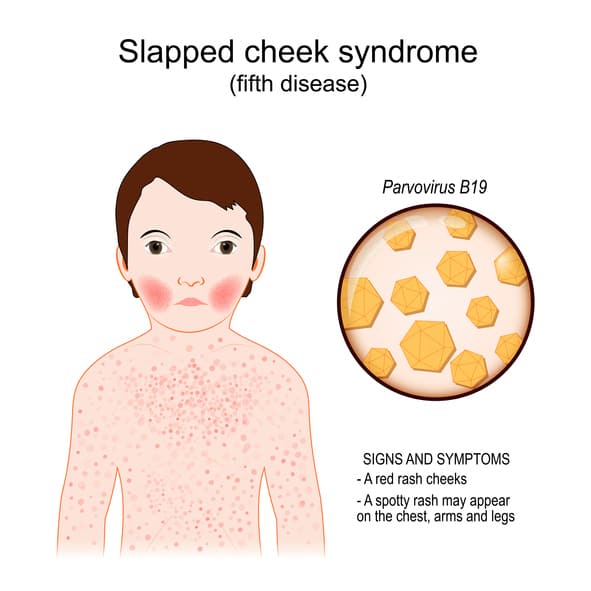 The name “Fifth Disease” can make a parent pause and worry. “Does this mean my child has already had four other diseases that I overlooked? Is the fifth disease better or worse than the first one? Is there a sixth disease I need to watch for?”

Alzein Pediatrics understands how parents who’ve never seen Fifth Disease can be concerned by those suddenly bright red cheeks – and how parents who have seen it before may think differently.

Fifth Disease got its name because it was fifth in a list of historical classifications of common skin rash illnesses in children. It’s typically caused by parvovirus B19. Because the virus is airborne, it is usually passed through sneezing and coughing, often in school or daycare settings. Your child will start experiencing symptoms within two weeks of infection.

The most common symptom is a red rash on the face sometimes called “slapped cheek rash.”  Your Alzein healthcare provider can often diagnose Fifth Disease just by seeing the rash on your child’s face. Other symptoms of Fifth Disease are usually mild and may include:

Your child may get also get a second rash on their chest, back, buttocks, arms, and legs. The rash may be itchy, especially on the soles of the feet. It can vary in intensity and usually resolves itself within seven to 10 days, but it can come and go for several weeks. As it starts to fade, it may look lacy.

The fifth Disease is usually mild and uneventful for children who are otherwise healthy. Complications can occur if your child has a weakened immune system. In rare cases, parvovirus B19 infection may cause serious health complications, such as chronic anemia that requires medical treatment.

If you suspect your child has Fifth Disease, call our office at 708-424-7600 or message us through your patient portal. We may recommend an in-office visit, a telehealth visit, or an over-the-counter pain reliever or cream to relieve itching and other symptoms.

Whenever you have questions about your child’s health, Alzein Pediatrics is here to help!

Fifth Disease sounds like a big deal. Is it?
Alzein Pediatrics On the Leading Edge of Pain Management & Comfort Care For Patients
Reading To Your Children, Even After They Know How To Read
CPR Classes in September!
Praising Children: How and How much

When today’s parents bring their babies and children into the pediatrician’s office, many times they are also bringing their own apprehension and foreboding along with that diaper bag. Their own parents probably did the same, flooded with memories of serious…
read more

“Stayin’ Alive” isn’t just one of the greatest disco songs ever; it’s also a fabulous way to actually keep people alive. Unfortunately, only half of the American adults understand why this Bee Gee’s hit can be lifesaving. Now, Alzein Pediatrics…
read more

Why is My Baby’s Belly Button Bulging?

It. Can. Freak. A. Parent. Out. When Baby cries or coughs, the belly button, or umbilicus, can protrude in a lump or cone shape and then recede when Baby is calm. What is the reason for this? The pediatric group…
read more

Come to our Snow Cone Social on August 10th!