Why Does My Baby Need A Vitamin K Shot? 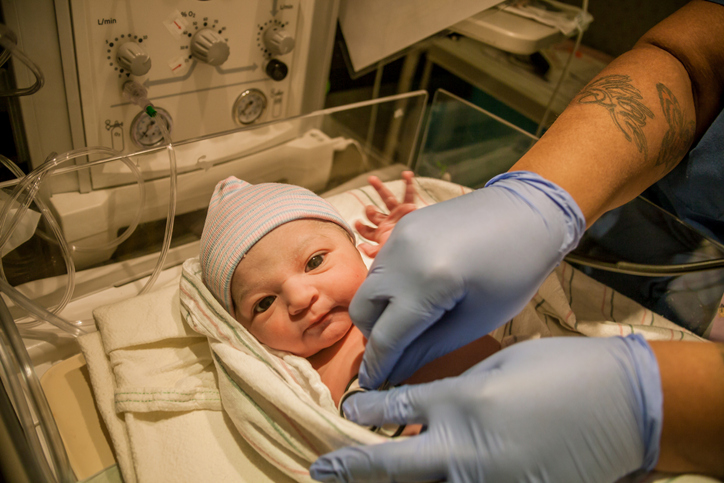 As the Internet continues to explode with false stories, proven medical science is sometimes labeled as “unnecessary” or “unnatural.” Lately, there has been a rise in parents questioning the necessity of a Vitamin K shot shortly after the birth of their child.

At Alzein Pediatrics, we completely understand your concerns about exposing your very precious and fragile newborn to this common medical intervention, so we are here to explain how this ground-breaking, miracle intervention has saved the lives of millions of children over the years – and how the Vitamin K shot still saves lives today.

Why does my baby need a Vitamin K shot?

Every baby is born with an extremely low level of Vitamin K stored in their body, and Vitamin K is vitally important to the clotting of blood. Without vitamin K, your infant could experience Vitamin K deficiency bleeding, or VKDB. Giving newborns a “booster” of Vitamin K at birth literally boosts the amount of Vitamin K available in your baby’s body for months, giving them the ability to much more effectively clot internal and external bleeding.

What exactly is VKDB?

VKDB can occur on the inside or outside of the body. Babies without a Vitamin K shot will not be able to stop bleeding because their blood cannot clot properly.

Can’t I just wait to see if my infant develops a problem?

If a parent refuses the Vitamin K injection and then sees bruising, blood in stool or urine, a bleeding umbilical stump that won’t stop, or excessive sleepiness, it’s too late to completely reverse the effects of internal bleeding – and the Vitamin K shot that would be used to treat your child.

Is VKDB really that big of a concern?

Before the link to Vitamin K and “hemorrhagic disease of the newborn” was made in 1944, and before 1961 when the Vitamin K injection became standard under the recommendation of the American Academy of Pediatrics, babies died or became disabled from VKDB. About 1 in 5 babies who develop VKDB die and two of every five that do survive will have long-term brain damage.

Can’t my baby get Vitamin K by mouth instead of a shot?

Oral Vitamin K is not nearly as effective against VKDB, especially for Late VKDB. The Vitamin K in the injection is better absorbed and lasts longer in your baby’s system. Additionally, oral Vitamin K has to be given in three precisely timed dosages – which are easily forgotten or delayed if Baby is sleeping, feeding or crying.

Accepting the Vitamin K shot, administered into your newborn’s thigh, gives your precious baby’s blood the ability to clot. It avoids deadly or debilitating internal, nearly undetectable hemorrhaging in the brain and organs. The Vitamin K injection protects your child’s life!

Do you still have questions about the Vitamin K shot?

Call our office at 708-424-7600 or click here to make an appointment to discuss your concerns. At Alzein Pediatrics, we are always happy to help!

WHAT Is My Child Putting In Their Mouth!?
Nutritional Facts of Breastmilk: A Perfect Balance of Everything
When Fun in the Sun Isn’t: How To Relieve A Sunburn
You’ve trusted Alzein Pediatrics since your child was a baby. Don’t stop now.
Ensure your college-bound teen is really ready to go!

WHAT Is My Child Putting In Their Mouth!?

Babies put anything and everything into their mouths as they explore and understand their world – and parents are usually right behind them, making sure nothing is going to choke or harm their child. Most children outgrow this behavior by…
read more

When Fun in the Sun Isn’t: How To Relieve A Sunburn

The hot July sun is here, and families are taking full advantage of it! As much fun as it is to be enjoying our time outdoors, it is important to remember to take precautions against UV rays, especially for young…
read more

You’ve trusted Alzein Pediatrics since your child was a baby. Don’t stop now.

On May 10 when the Pfizer-BioNTech COVID-19 vaccine was authorized for use on children ages 12-15, all of here at Alzein Pediatrics were delighted. We know firsthand the long-term, damaging effects of this virus on adults; our knowledge, education and…
read more

Physicals now & Pfizer whenever (it’s convenient for you!)

Appointments available for school physicals and the Pfizer vaccine   If you’ve wanted to get your children over 12 protected with the Pfizer-BioNTech COVID-19 vaccination but missed our vaccination clinic days, we have great news!  Alzein Pediatrics is now offering…
read more
read more posts